Please call us on

Our Vintage Marine Drive Tour is operated by our small fleet of vintage coaches to transport guests around the magnificent Great Orme in Llandudno.

The tour is a four mile scenic drive round the magnificent Great Orme headland to Llandudno's West Shore before returning once again to the Llandudno Pier entrance. During the tour you will enjoy spectacular views at every turn. By travelling on the vintage coach, you will witness the Great Orme from an elevated position and observe this wonderful natural asset from a comfortable seat.

There are stunning views in all directions, all year round, from the brilliant flora and fauna of the summertime to the crashing of the waves below on a stormy winters day.

This service is demand responsive and may not operate with less than 10 people onboard. 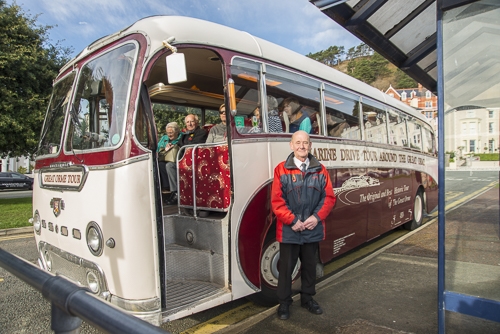 Some of the tours features include:

Built on a site dating back to the 6th Century, St Tudnos Church was built in the 12th Century but has undergone extensive restoration over the years. Fabulous stained glass windows decorate this primitive little church with an unusual north facing window said to have been used to provide a light for ancient mariners so they could identify their positions out at sea. The cemetery is still in use today and provides interesting information on the former inhabitants of the town of Llandudno and its surrounding areas

High above the sea is the lighthouse constructed in 1862 by The Mersey Docks & Harbour Company who, with great attention to detail, built a fortress like building using dressed limestone and vast bulks of Canadian pitch pine.The light, at 325 feet above high water, was the highest on the coast of Wales. It was first illuminated on December 1st 1862 and remained a continuous warning to mariners until March 22nd 1985 when the optic was removed. It can now be viewed at the Visitor Centre on the summit of the Great Orme. The Lighthouse now serves as an interesting and well appointed B & B guest house.

The Rest & Be Thankful Café

The cafee, just above the lighthouse, is exactly half way round. It is the only café on the Marine Drive and offers remarkably good quality and value. In the car park of the café there are fine views across to Anglesey, Puffin Island and on a clear day, the Isle of Man

Otherwise known as Mares Well. It is one of the few natural water sources on the limestone Great Orme. The fountain was constructed by the road builders to provide water for the horses (hence its name) that pulled the coaches laden with visitors in the days before motors.

Way below the Marine Drive, on the south-western shelf near the west shore, are the remains of the Royal Artillery Coastal Gunnery School that moved from Shoeburyness to Llandudno in September 1940. Over 700 military personnel were based at the school at its peak.

Amongst the many legends associated with the Great Orme is the story of Llys Helig (Helig`s Palace) and the lost Land of Tyno Helig. It is said that at very low tides the ruins of the old palace can still be seen under the water and on still summers evenings it is sail that the sound of the church bell can be heard

There is an area on the western slopes of the Orme, overlooking Conwy Bay, which provides excellent views across the estuary towards the ancient palace. An exclusive development now carries the name Llys Helig and offers superb views of the River Conwy estuary, Anglesey, the Menai Straits, Llanfairfechan and Penmaenmawr.

Situated in the grounds of the recently extended, but now closed, Railway Convalescent Home (until 1947 the Old Abbey Hotel) are the surviving remains below of Gogarth Abbey. This was never a monastic house but a Palace of the Bishop of Bangor built on land given to Bishop Anian by King Edward I in 1284 following the baptism by the bishop of the first Prince of Wales. The Palace was burnt down by Owain Glyndwr c. 1405.Although it remained the property of the Bishops of Bangor it was not rebuilt and gradually many of the remains fell into the sea through coastal erosion. The remains were sold by the church with its surrounding land in 1891

Alice Liddells parents, after honeymooning in Llandudno, decided to build Penmorfa, now the Gogarth Abbey Hotel, as a permanent holiday home on the West Shore in Llandudno. Though there is no evidence that Lewis Carroll ever visited Llandudno, Alice who was the inspiration for Alice in Wonderland, spent many childhood holidays there.